This page addresses the questions: (1) How many people use Distance? and (2) Which taxa do they use it to study? To answer these questions, we used the database of people who have downloaded Distance since the release of Distance 3.5 on November 23rd 1998. We eliminated duplicates by only using the first entry where the same email address occurred more than once per version. (We lost information about those downloading Distance between August 2006 and December 2006, between June 2013 and June 2014 due to webserver failures.)

We also consider the number of people on the distance-sampling email list.

As the figure below shows, Distance has been downloaded from nearly 50,000 unique email addresses.

The number of countries in which folks downloading Distance are working stands at >100.

We recognize that the number of unique emails registered during download is likely an overestimate of the true number of people using the program.  This is because: (1) some people will have changed email address, and then re-registered to download a new version under their new address; (2) some people will have downloaded the program but never seriously used it.  On the other hand, we known that some institutions have downloaded the program only once, and then loaded it onto a network of machines for use in teaching, etc.

A separate measure of the number of “serious” users of Distance is those on the distance-sampling email list.  These people receive a few emails a week on the topic of distance sampling, so can be taken to be somewhat committed to the subject. Not all members of the list are necessarily Distance users, but we expect that most are.  List membership currently stands at about 1000, and has been increasing quite slowly over the past few years.

We conclude that there are at least 1000 people who regularly use Distance and perhaps an additional 5000 - 10000 casual users.

Last updated: March 2017 The following figure summarizes the results of the optional questionnaire, which asked people registering Distance to indicate which taxa they use distance sampling to survey. By far the greatest proportion of Distance users survey birds and terrestrial mammals.  We were interested to see this, since the biggest proportion of people who come to our workshops study marine mammals, with terrestrial mammals and birds coming second and third.  Much of the impetus (and funding) for methodological development has also come from the marine mammal community.  We rarely see those studying plants on our workshops, despite them making up around 10% of those using Distance. 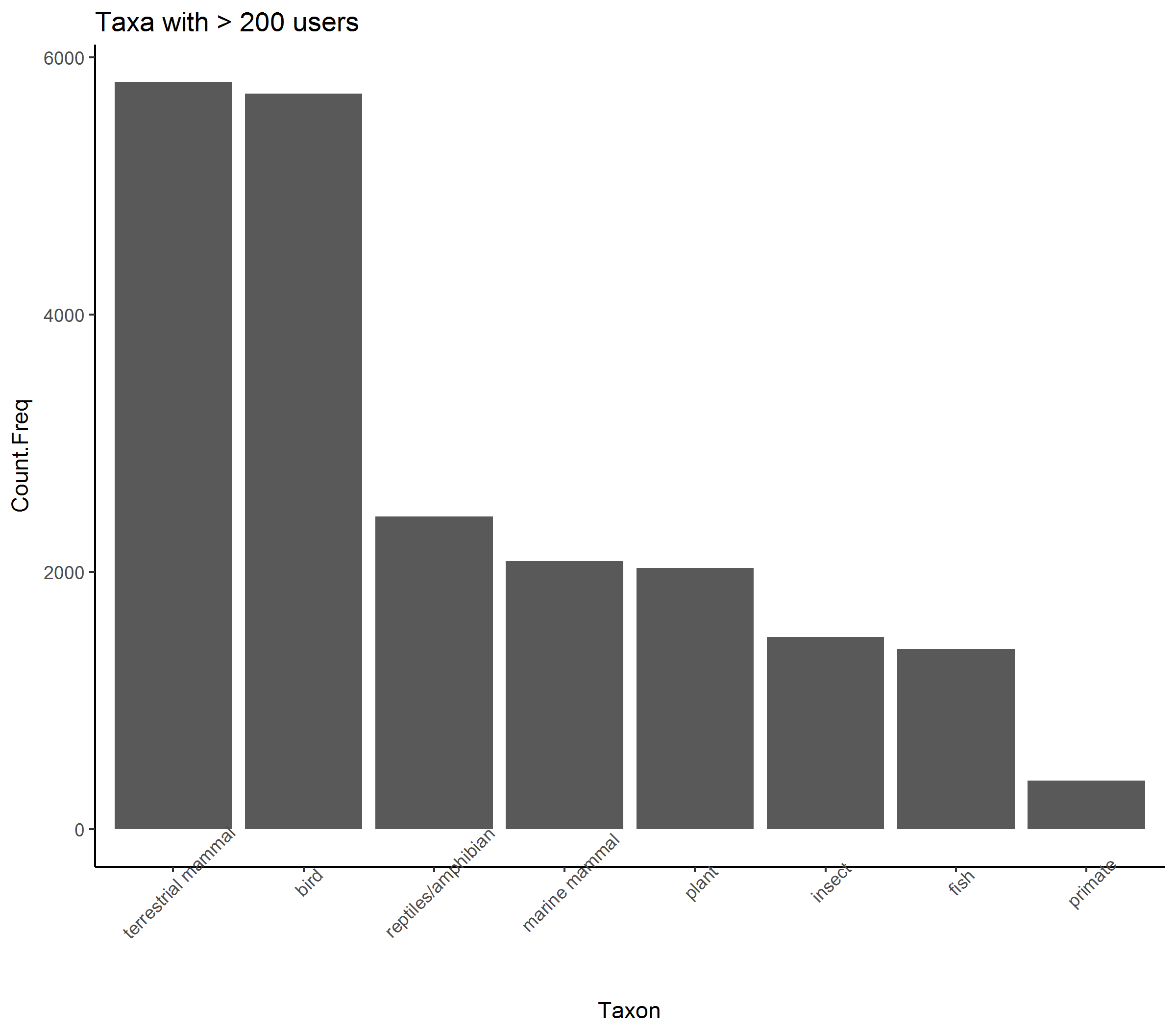 We were interested to hear that one Distance user in the Seychelles uses the method to study the density of “shooting stars on a clear night” and “toys scattered in my children’s bedroom”!  Others claim to be using Distance to study dog biscuits, dirty dishes, college students, football, Jeff Laake, sasquatch and yeti.  Perhaps some more serious, but unusual, studies included fishing vessels and gear, snags (dead trees), fungi, fossils, hunters, forest fires from watch towers, spatial distribution of greenhouses and viruses.