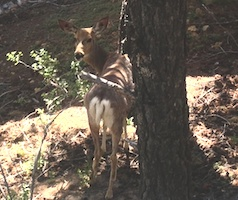 The latest version of Distance is 7.3 Release 2. Distance has been downloaded by over 50,000 users from around 135 countries.

What does Distance look like? Here are some screenshots.

Information on the history of Distance is available on the Distance History page.

Distance 7.3 is the latest software, and is the recommended version for most users. It includes all of the features of Distance 7.2 and now has the addition of a Shape Import Wizard to help you get your study area and stratum shapefiles into distance projects. It is a Windows program, featuring a graphical user interface and has a built-in GIS, which can be used for automated survey design. Distance 7.3 also has updated versions of the simulation, spatial modelling and multi-analysis engines. In addition, following a major new R release, we have now made a second release of Distance 7.3 with updated packages compiled in R 4.0.2 (the latest version at the time of release, July 2020). Using the DSM, MRDS and MA analyses and the simulation engine requires installation of the free statistical software R.

Five previous versions of Distance are available by e-mail request, we no longer provide downloads on the website (links to programme descriptions in the table below).

Further information on main features in each version is available on the new in Distance page.

The following table summarizes the hardware and software requirements of the three versions. Click on the software titles to proceed to the registration and download pages, and for information about obtaining the software on CD.

1These figures do not include the statistical software R, which must be installed before the density surface modelling and mark-recapture distance sampling analysis engines can be used.