What is distance sampling? 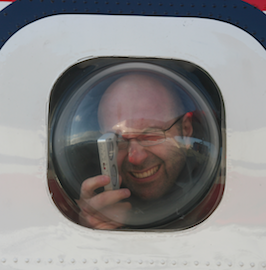 Distance sampling is a widely used methodology for estimating animal density or abundance. Its name derives from the fact that the information used for inference are the recorded distances to objects of interest (usually animals) obtained by surveying lines or points. In the case of lines the perpendicular distances to detected animals are recorded, while in the case of points the radial distances from the point to detected animals are recorded. A key underlying concept is that the probability of detecting an animal decreases as its distance from the observer increases. Much of distance sampling methodology is concentrated on detection functions, which model the probability of detecting an animal, given its distance from the transect.

The below animation illustrates a simple line transect survey. As the observer moves along the transects (red line, showing progress along the current transect), objects are detected with a probability dependent on their distance from the observer (blue points are detected). Distances to the objects are recorded in the histogram. The histogram shows a characteristic decrease in frequency as distance increases — it is this relationship that is modelled by the detection function.

Code to generate the above figure may be found here.

We offer free online course, available to everyone. The course includes more than 20 video lectures, multiple exercises with solutions and narrated demonstrations of the software covering both Distance for Windows and the Distance R package. There are many datasets to analyse and a feedback mechanism on the website to ask questions.

We also offer live interactive workshops which are currently running in an online-only format. Please see the previous link for our latest workshop offerings.

The core concepts of distance sampling analysis are described in:

The previous edition of this book, published in 1993 is available online for free:

Advanced topics in distance sampling analysis are described in:

A book discussing practical considerations, along with developments in the decade 2004-2014 can be found in the recent book:

from Journal of Applied Ecology, which describes the various elements of Distance may be of interest. This paper is now the default citation for Distance.

If you’re interested in density surface modelling, there is a web site matained by the Denmod group, who are coordinating advances in these models. One Denmod output of particular interest may be the wiki Questions Frequently Asked by Marine Mammal Density Surface Modelers.